HOLY CRAZINESS OF A CELEBRATION WEEK

First off, Schuyler you freakin lucky dog!  You got to take care of all the cars?!
AH!  Green with jealous rage right now... ;) haha

So this week we had a lot of celebrating and stuff to do.  For one there was Easter, we also got to celebrate DeGraw's year left mark, also DeGraw's birthday!  Plus we had scheduled not one... but two flippin lessons this week!!

We had set up a lesson with G on the 17th.  But he "bunged" us.  Super weird cause G has never really been like that before.  So we were waiting around for him and he never showed up.  He then called the next day and explained that he was stuck at work or something like that... :/  We are planning on meeting with him this week so hopefully that happens!

So I'll take you on the adventure of the 18th.  We wake up and boom it's DeGraw's Birthday.  I got up a bit earlier then usually to make him some breakfast.  Guess what I made?  CHOCOLATE CHIP PANCAKES!  I think they turned out alright?  Either way DeGraw said they were good so, maybe he was just being nice or maybe they were actually okay.  We ran out of baking powder so I was like shoot how am I gonna make them pancakes ( this was after I had mixed basically everything together already)  So I was looking around when I found some yeast.  I was like BINGO I can put that stuff in instead?!  I just put in a little, plus a bit of cinnamon and ta da!  We had some pancakes!   After this we had District meeting for a bit, which DeGraw is good at doing.  The sisters were not able to make it cause Sora O was sick... like superish sick.  Okay now us elders contact around to the Easter targ at the mall to check out the neat stuff that might be there. (Targ is basically a bunch of little stands/shops)

After searching the targ for a bit we decide to head back to the church to watch our Easter movie President allowed..... :)  We are half way back when we noticed a huge group of people.  So I was like "come on let us go check it out"  Right as we get there, everyone
starts moving!  We ended up getting swooped into this crowd walking down the middle of Centru.  It was a struggle trying to stay next to your comp cause everyone was moving and what not.  Eventually we see what is actually going on. 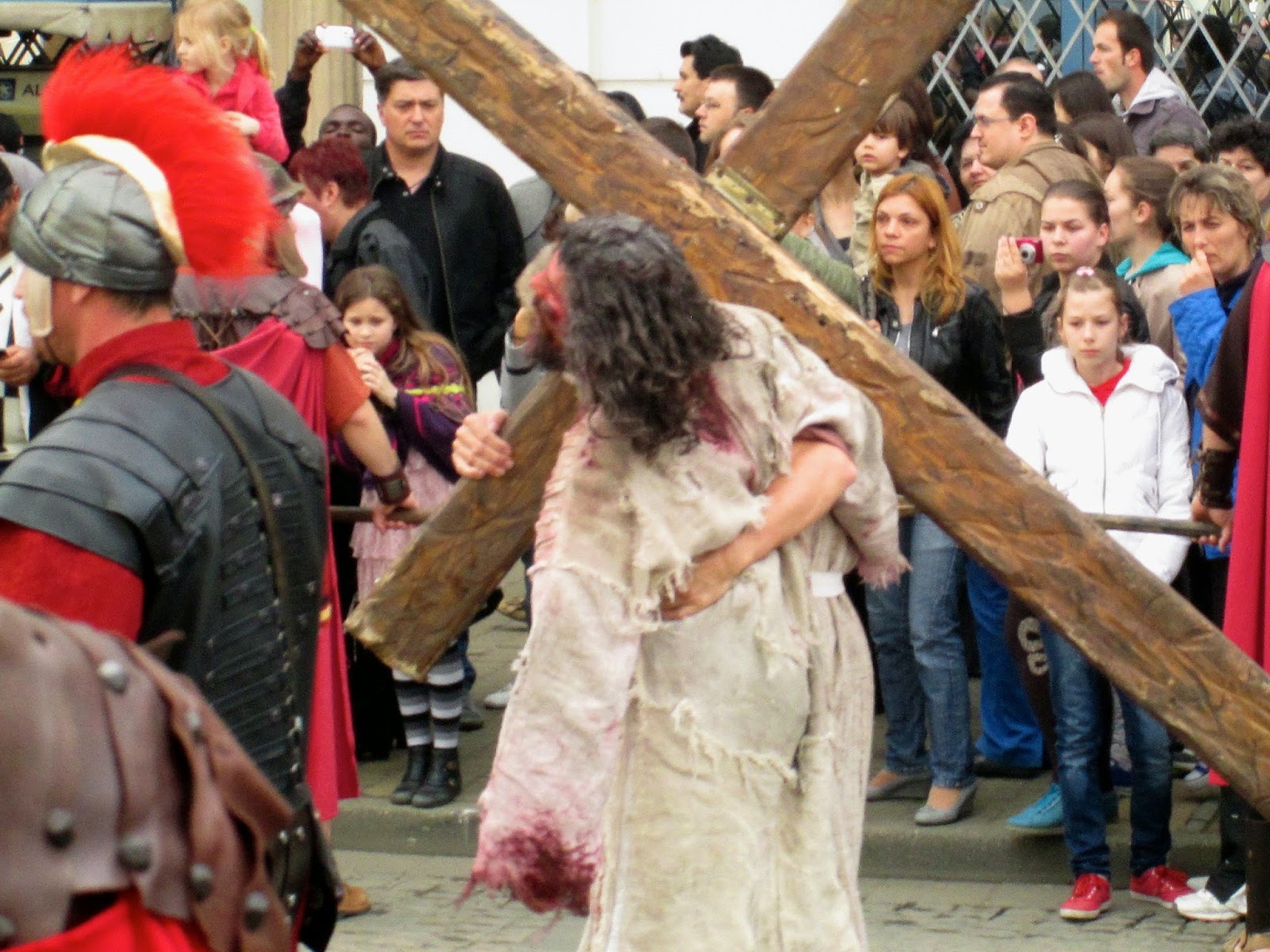 There are some "Roman Guards" separating the crowd from the very center.  In the very middle there are guards "whipping and beating" 3 torn up men.  One of them carrying a cross.  Basically we stumbled upon a live moving play of Christ's walk through Golgotha.  It was super interesting and I got a lot of pictures and stuff.  So that was a super unique experience.  After walking down the middle of Centru for about an hour, we had to head to the church to watch our movie.... :)  We watched Despicable me 2!  Super good show!  So that wraps up the adventure of the 18th. 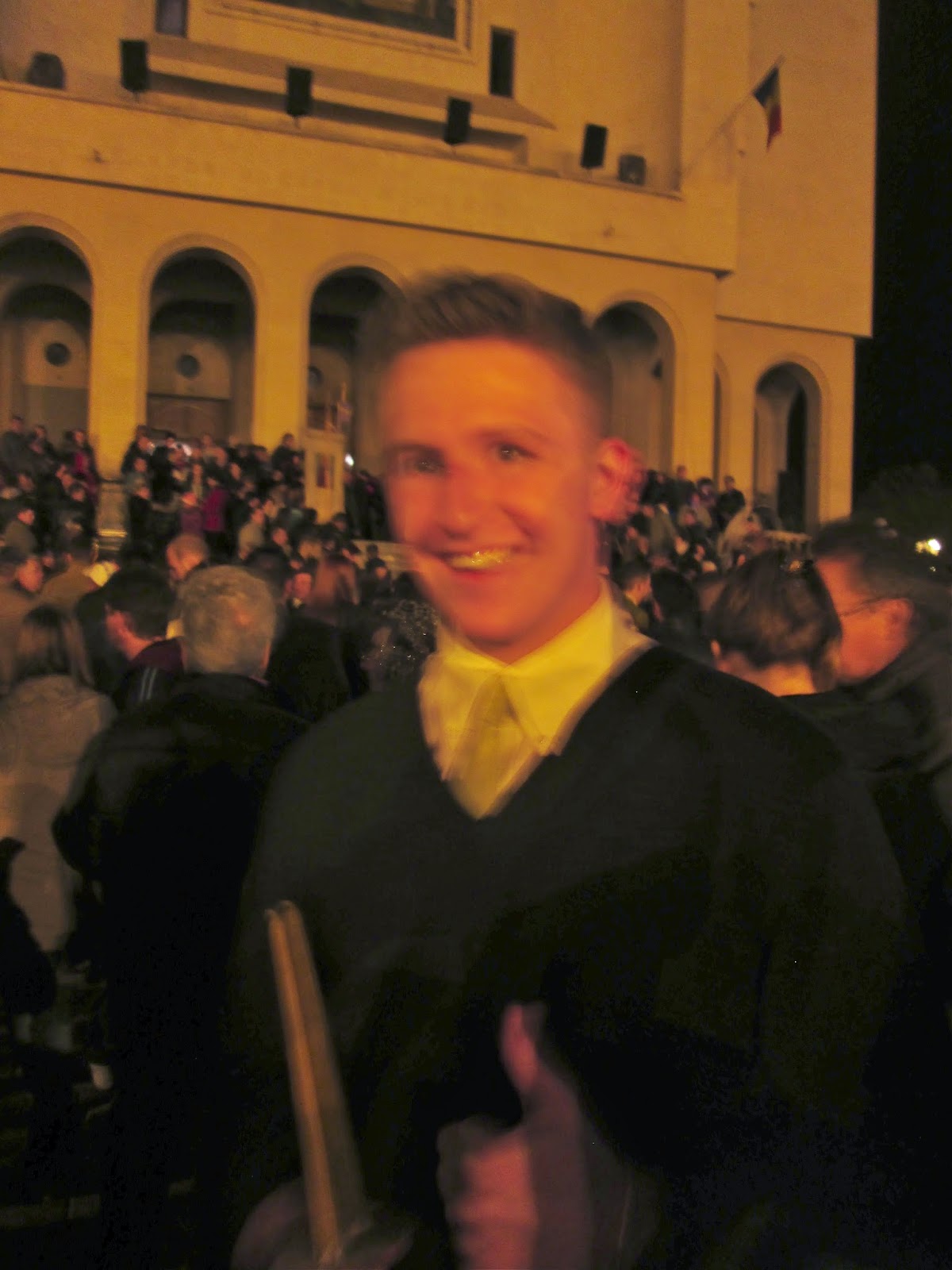 Now it is Saturday the 19th.  We set up with a legit guy A.  Elder DeGraw and Rodenberg contacted them on there mini exchange the other day.  He has so much potential.  Ill explain how.  He is married and has a family.  He has a job and is busy.  He called us to set up a time to meet. He actually wants to talk about our religion!!  Sadly he “bunged” us as well this week.  He actually got sick and couldn't make it.  He then called us yesterday and said he is still planning on meeting with us this next up coming week!  So I am really excited to meet this guy!  So the 19th is When Romanians start celebrating Easter.  Everyone gathers together at a church.  In our case the Huge giant white Orthodox church in Centru.  Everyone starts getting there at like 11 or 11:30.  Then at midnight is when the magic happens.  A fire carrier brings the fire from Jerusalem. (The fire i guess just appears from God there and they have to spread it around or something like that)  We all bought candles and you are supposed to light your candle with this flame.  It is super cool, the priest spreads the light to people and then the people start spreading it to each other and so everything is glowing in candle flames!  Then they have their midnight mass.  Afterwards it was like 1:30 or 2.  Now the goal is to get your flame all the way home without letting it burn out, so all your sins for the year can be forgiven... Sadly I didnt make it...  :) but ya that is how it went over here in Romania!  I am so glad President Hill let us go be a part of the Romania culture!  It was an awesome experience!


Here are some random facts about Paste/Easter here.  Wooden eggs are a big deal.  You go around to the Targs and buy some, I only bought one (super legit one) this year, so I can have room for next easter!  Also Saturday basically through Monday you greet people by saying " Hristos a înviat"  They then have to respond " Adevarat a înviat"  Which translated means " Christ has risen" " True He has risen".  These phrases also carry over into an Easter game they play.  You take a boiled egg and your opponent takes one.  You hold them over each other and one person says " Hristos a Inviat" Then other then replies " Adevarat a Inviat"  Then you smack the eggs together!  If your egg cracks, you loose!  I really like this game haha :)

Next was Sunday the 20th.... Super tired.  We had permission to sleep in as many hours as we missed.  The one problem was we had church, and stuff we had to do, so we didnt really get to.  So after church we took those hours and caught up on  some sleep :)  Later that day we had an awesome Easter dinner prepared by Elder Preece!  Following that we dyed easter eggs!  So Easter was a success!

This now brings us to the reason I was not able to write to you all yesterday.  Basically our whole zone went down to Timisoara to play some lazer tag!  We got there kinda early, went to the place and realized it was closed ALL DAY!  So of course we didnt waste our P-day!  We went to the park and played soccer, basketball, and did some slak lining!  We then still had time so we played cards and ping pong.  Then turns out we looked at the wrong train times on the computer, so we missed our train to get back early enough to do some internet.  So after realizing this we all got back to the church... and had a little dance party  Sisters weren't dancing, no worries, basically just us elders having a fun time. :)  That made my whole day.  And since we were gonna be there for a while, we got to go to One of the Timi elder's investigators soccer game!  He is profesh.  So that was my day yesterday haha super hectic and not at all how we planned, but it turned out awesome! :)

I had a moment on the train yesterday... and I was just like " hey I am in Romania!  on a super gheto train!  While some lady is shouting something behind me!  This is pretty nuts! "  But I still feel this new energy to do good... which is good :)

Thank you all for your support.  I know I say that all the time, but I dont know how else to express how much it means to me!  I glad you all got to have a good time down in California ( sorry dad)  Miss that place like crazy!  :)  Hope you all travel and do everything you need to this week safely!  LOVE YOU SO MUCH!!
Elder Cooper

P.S. Had to say good-bye to Elder Rodenberg. He has basically just been the leader of my entire mission!  He has either been zone leader or AP over me the entire time here...... so of course he has been a huge example to me. I'm grateful for him. 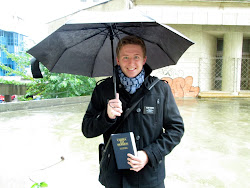 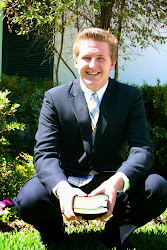